I found out about a group exhibition named Elevated Corrugated in San Francisco at The Museum of Craft and Design when visiting cardboard artist Kiel Johnson. It features some works that I really wanted to see in real life! Click to enlarge!

I guess the curator (Marc D’estout) had some of the same problems as this website has! Making a material the starting point of an exhibition can only work if you find an interesting angle to view the material from. What I found most interesting in this exhibition is the way the artists defined their own method of sculpting with cardboard.

This cardboard camera is by Kiel Johnson. Kiel is a versatile artist who, alongside his large labyrinthine drawings, often works on cardboard objects and video’s. 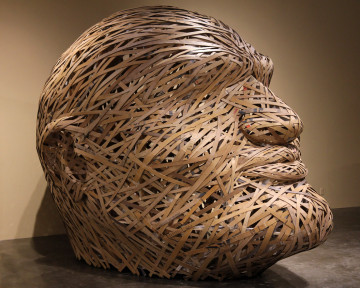 Michael Stutz works are superlarge! This technique of weaving cardboard makes it possible to see the sculpture from the inside and the outside. Tom Burckhardt shows some parts of a bigger installation he made named Full Stop. The details in the cardboard versions of his artistic tools give me the feeling that Tom loves his studio and work. It’s almost romantic! 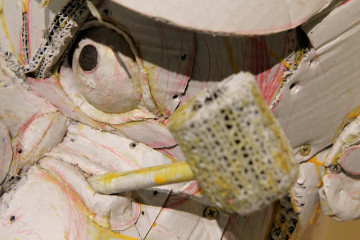 Scott Fife’s work is super detailed and rough at the same time. It is robust and solid! The screws, glue and sketch lines contribute to the personality and character of those who are portrayed. The faces show a lot of subtlety, while they seem to be made with big gestures. 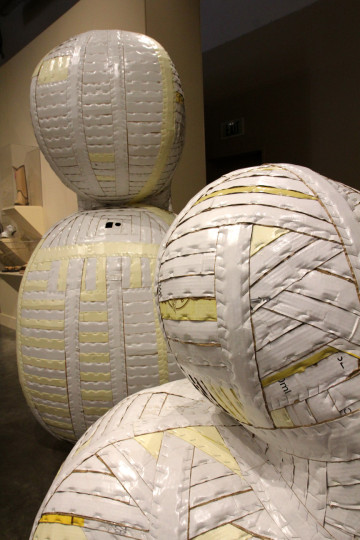 Ann Weber gives reused cardboard new look and feel. Leathery or fabric like with staples as a kind of sewing. After some sort of varnishing the gourd shaped objects are even more difficult to interpret. I had to think of old baseballs and leather sofas 🙂

And there were many more works! A well balanced exhibition in a nice and clean gallery space. I have to thank the KLIK! animation festival (especially Tunde Vollenbroek) for taking me and my Midnight Madness animation show on a West Coast tour! This why I was able to visit this exhibition!