I heard someone say the Burning Man Festival is a new World Wonder. Incredible! Something with the motto “leave no trace” is now becoming a part of a list of things that only wanted to leave their trace. Like most of the artists on this site, the consciousness that everything is impermanent is a part of  James Grashow’s work. We agree! Cardboard artists should claim the temporary in contemporary art!

James Grashow is a sculptor and teacher of cardboard. He creates large environments: cities, aquaria and crowds of monkeys in a bold, powerful style. His masterpiece is a large fountain, installed outside, where it slowly fell apart due to the weather. “Corrugated board is a material that understands its mortality, it knows that it’s destined for trash. It is bonded to the human experience. They say that 85% of everything on the planet has spent part of its life in a cardboard box. “

James Grashow’s father had a cardboard factory and he has been making things out of it since he was a child. His main technique is extrusion, connecting two shapes with a strip of cardboard. He approaches cardboard as a sculptor, bending, push and twisting the material into the shape he wants it to be. 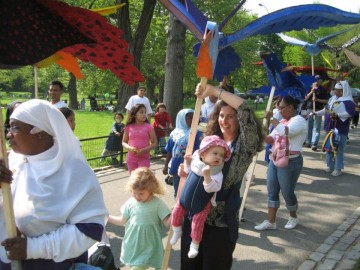 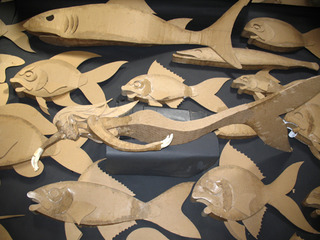 He also makes a lot of work in workshops with local participants: like the above Cardbirds workshop and Cardboard fish workshop.

“I am convinced there is a link between corrugated board and creativity. Its very valuelessness liberates us. Boxes, tubes, sheets of corrugated board – everything that lives between the good stuff and garbage – becomes a perfect partner for play. Rescued from trash, it asks only, ‘What do you want me to be?’ Corrugated board is the DNA of creativity. Boxes, glue, tape, knives and a group of willing people can create anything. And have a great time doing it.”

If cardboard ever needs a spokesman, we suggest James Grashow as it’s voice!
httpv://www.youtube.com/watch?v=dY-dUiI1W7E (this is a video by floatingstone.com, check also their other videos about Grashow)

Oh yeah and one last thing: he also made a city of out of cardboard once. Too much for this post maybe, but the detail is incredible and the buildings have so much personality! 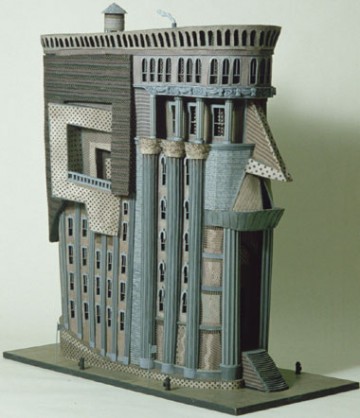