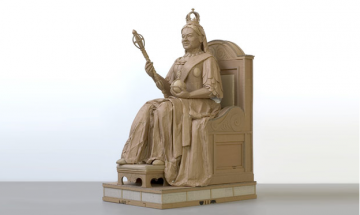 Sometimes it’s difficult to separate admiration for someones working ethos from the end result of what he or she has worked on. I’m stunned by the perfection of the works by Chris Gilmour. It’s hard to ignore his work when looking for cardboard artists on Google. He’s top ranking! There’s a lot of people out there that really appreciate the effort and the labor that he puts into these works, I enjoy it too! They’re really real… But still… A little voice inside my head, probably something sour, leftover from the art academy, tells me that just copying things is not enough. “It’s not art if only the choice of materials and the craftsmanship matter”, says the little voice “there’s more to a good artwork: like good ideas, originality, interaction, the intention to change or rule the world, the intention to shake me up and recreate my view on the world.”  Or just make me laugh. Realism is of course a very interesting subject, but I think we get the idea now…
On Chris’ site there’s some nice thoughts about this subject:

“The ordinariness of the actions associated with these objects causes the viewer to unthinkingly act out the gesture associated with it- to type, or to open the car door- and it is this contradiction between the seeming functionality of the objects and the fact that in reality they are “fake”, this peculiar conceptual short circuit, which increases the bewildering effect of the works and lets us into a poetry of pure plastic forms”.
Guido Bartorelli / Translation: Simonetta Caporale

In the end, I have that sensation! And probably even more when I would have seen it in real life… This work is like superreality!